Today we had a foggy start, but a sunny end which resulted in 3 lifers and a whole lot of new birds to add onto the year list in Norfolk. We went to Lynford Arboretum, Sculthrope Moor, Holkham Gap and ended up at Titchwell.

We started off early-like always-for an unexpected day ahead of us. The first stop was at Lynford Arboretum and we was engulfed in all of the bird calls with a variety of different types of tit, finch and thrush. After a brief wander around we met a man that kindly informed us that there were Hawfinches in the paddock next to us and when we got there, there was a flock of about 20 of them in a tree. After finishing off we then moved onto Sculthrope Moor.

Once we had arrived there we were told that the Arctic Redpoll was still on the feeders so we rushed down there to see it. Unfortunately, it had flew away before we got there but whilst we was waiting for it there was multiple lesser and mealy redpolls going on and of the feeder also lots of siskin as well.

There were multiple woodpeckers such as green that kept laughing, great spotted drumming with the occasional call, finally a lesser spotted woodpecker was drumming in the back ground which was one of the lifers.

After a while the Artic finally dropped onto the left hand feeder and showed for a bit before disappearing of again.

Then we went around a few hides and unexpectedly got a willow tit which was a lifer also good view of brambling and bullfinch then went onto Holkham Gap to get snow bunting and shore lark which sadly did not get so when to Titchwell.

When we were on our way to Titchwell we had a red kite fly over the car which was nice. Once we had arrived, there were a lot of birds down at the beach so we hurried along the costal path. When going along it we had very good views of water rail which was nice and when we had eventually got to the beach there were hundreds of waders including avocet, ruff, grey plover, knot, sanding, black and bar tailed godwit also curlew and dunlin. Once we had started sea watching there were many goldeneyes of shore and one smart adult male long tailed duck. Then just before we was going to head back for lunch we had a male red breasted merganser fly in and landed on the sea, also a gannet flew through which was both new for the year. Then on the way back we just about got a glimpse of the spotted redshank which was also new for the year. 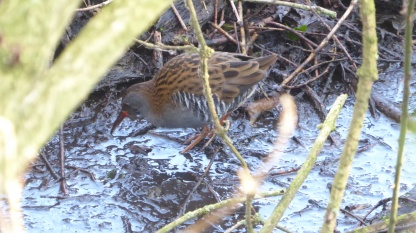 After lunch we went to try and find the red crested pochard which we eventually found at the back of the pool. Then we decided to make a final stop to the beach which resulted in a black throated diver which was new for the year list and the hundredth bird also a slavonian grebe.  Then on the way back we got a male hen harrier and a barn owl on a post. We ended on 103 birds for the day 140 for the year and 245 for life.