Had a walk round Rainham today, was very cold.  There was not too much on the frozen reserve, most was on the river.  I was lucky to hand feed a tame robin.

Was amusing watching a mute swan walk across the ice, dropped through couple times and got back up, then continued to the part that was not frozen. 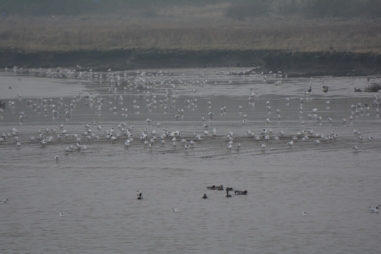 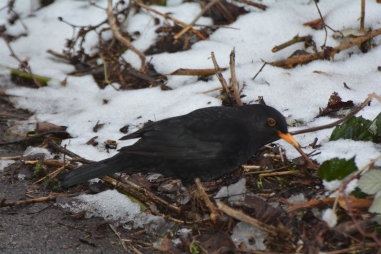 Had really good view of Hawfinch, Dipper, Buzzard, Great Grey Shrike, Raven and Nutatch today in and around the Forest of Dean.

Also saw a Wild Boar sitting under a tree having a rest.

Was a good, but long day out exploring. 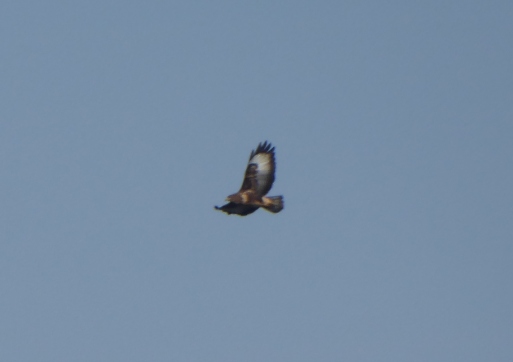 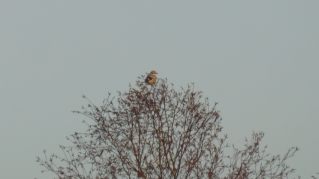 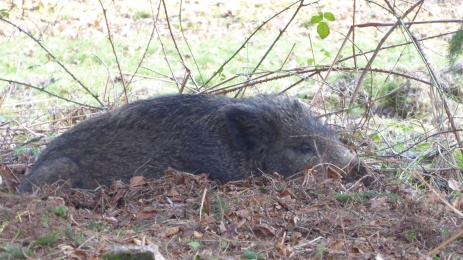 Today was a great day at Minsmere that ended with a Glossy Ibis, Glaucous Gull and a Murmuration of Starlings (27/01/2018).

When the starlings flew over our heads there was an array of sounds and when they turned it was as though they were dancing in the sky. 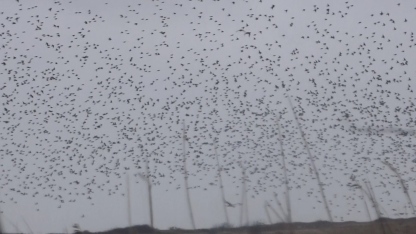 Today was our best day at Dungeness so far with a great selection of birds.

From the ARC hide a Kingfisher was sitting on a branch and we watched it fly back and forth.  A Great White Egret was hunting in the reeds at the far side and a Marsh Harrier flew over.

On the walk out we had a Sparrow Hawk glide across in front of us and  at the entrance to the reserve the Tree Sparrows were feeding.

At the beach we had lots of different species which we had not seen there before including, close views of Red Throated Diver, Gannet, Razorbill, Little Auk, Guillmot and Great Crested Grebes.

On the Reserve were various ducks including, Gadwall and Shovler.  We managed to also see Smew, Goosander and Goldeneye swimming about.

At the Denge Hide a Black Throated Diver swam close by and I managed to a get a photo.

Under the metal plates we saw three Voles running about.

We ventured out to the Laid Pitts and found a Slavinian Grebe and had help finding a Long Tailed Duck.

At the end of the day we were back at the ARC Hide and witnessed 38 Bewick Swans swoop in for the evening.  I had an exceptional day and are now on 103 for my year list.

An early start at Rainham Marshes and heard a Kingfisher and a Ring Necked Parakeet flew over.  On the walk to Averly Bay we have Water, Rock and Meadow Pipits.

A flock of Canada Geese flew over with Dunlin and Lapwings flying across the over side of the Thames.  In the bay we saw Avocet and Curlew flew over. 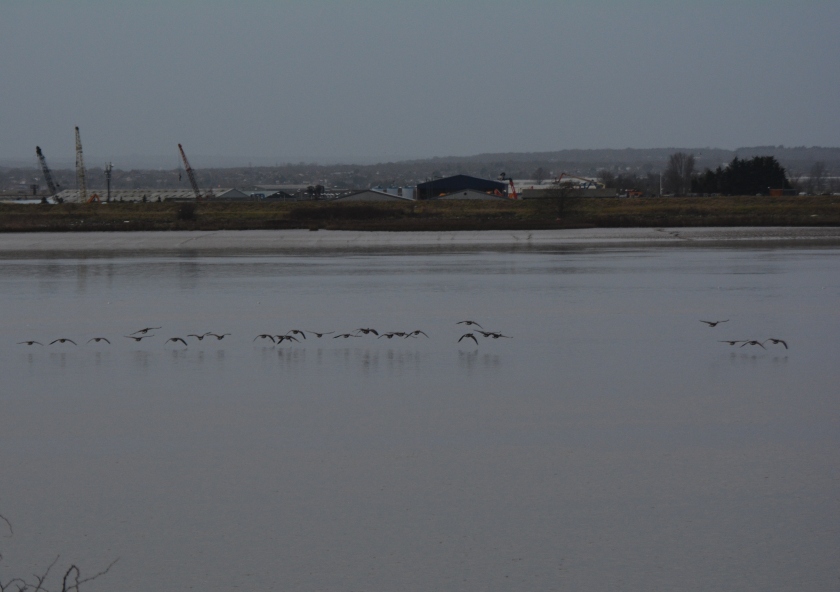 When we was heading into Rainham a Fieldfare was eating berries in a bush. 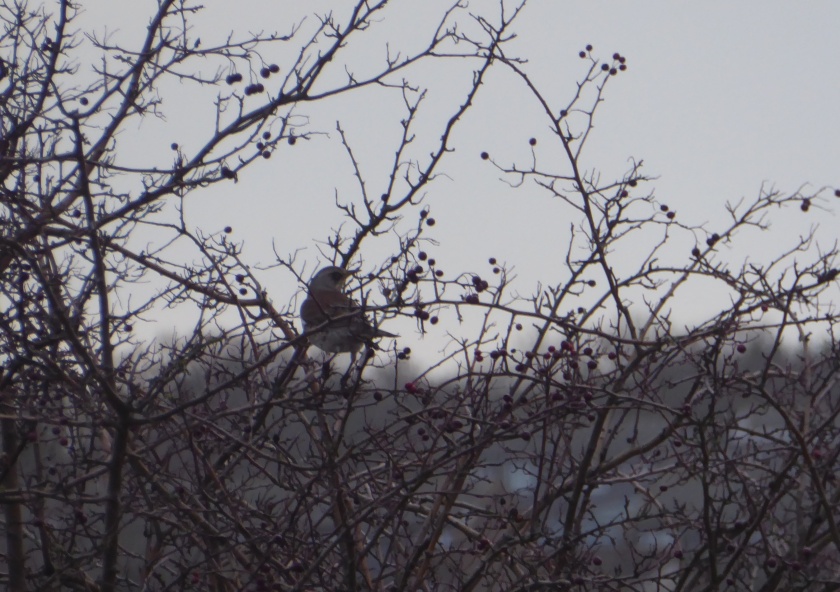 Walking round with heard Bearded Tits ping and saw them hunting for food in the reeds.  From the Butts Hide we had Ruff and Pintail with other ducks.

On the Pylon we had a good view of Peregrine Falcons and one chased another out of its territory.

From the platform we saw lots of Pintail together , which was a surprise and they appeared to be talking to each other.

We could see the Barn Owl in its box and also caught a Brent Goose fly down river and towards to the woods.  About 10 Snipe were hidden along the edge of the reeds from the Ken Barret Hide.

When we got near the cordite store we had the best view of a Firecrest jumping about in the ivy and bramble.  Managed to get a photo but was no that clear due to low light.

Also jumping about was a Goldcrest .  In the cordite a Bullfinch was calling and we saw if fly between some trees and then disappear.

On the walk back to the centre a Buzzard was being mobbed by a Crow and when in the centre the was a Short Eared Own in the distance.

Had a really good day and managed to see 81 one birds, thanks Howard.

Whilst playing in the snow it was fascinating to see all the different footprints in the snow.  I was surprised how big some of them were for example Coot and Moorhen.  I tried to identify them by watching them walking about.

Looking out at the Gorge

Moorhen footprints walking towards the water

We got up early to get to the reserve for opening and watched the sun rise on the drive there.  A Pheasant met us by the feeders in the car park, with Coal and Marsh Tits flying in and out of the feeders.  Whilst Dunnocks,  Robins and Chaffinch  hopped undeneath. 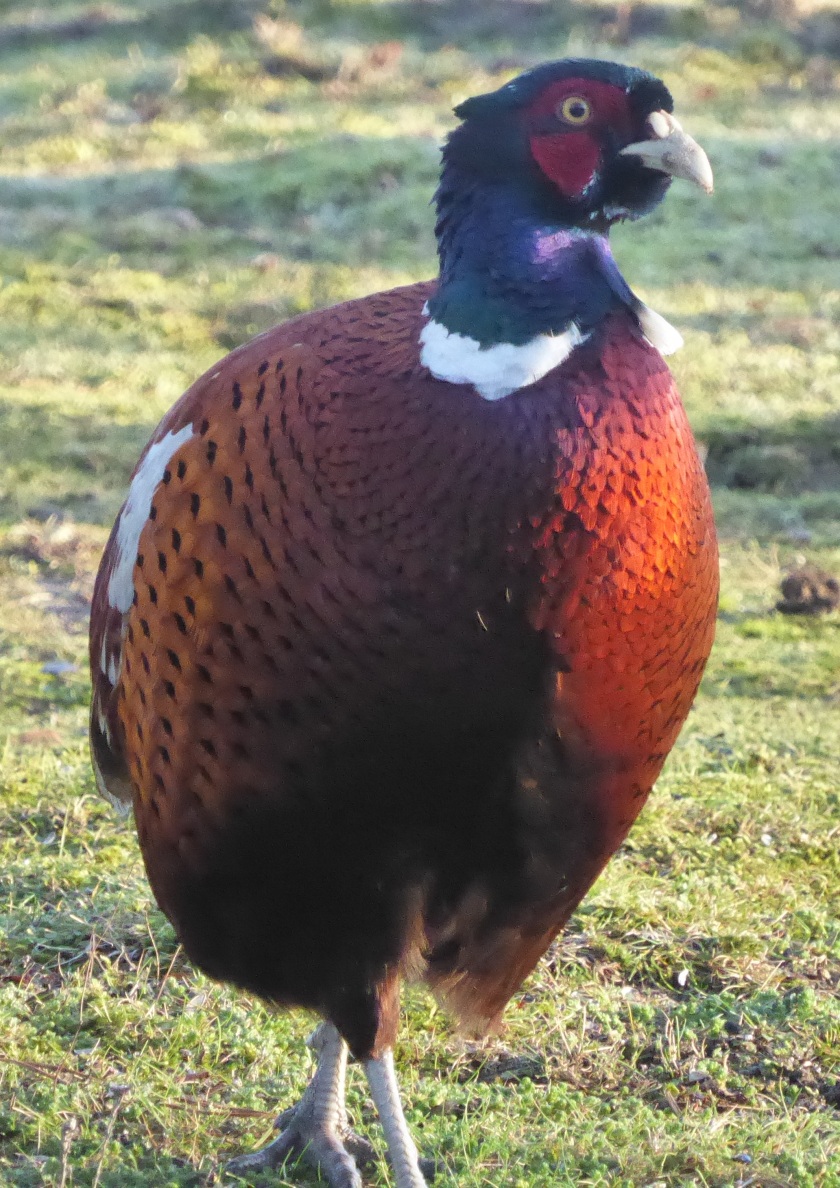 There were footprints of Deer though we are not sure which ones. 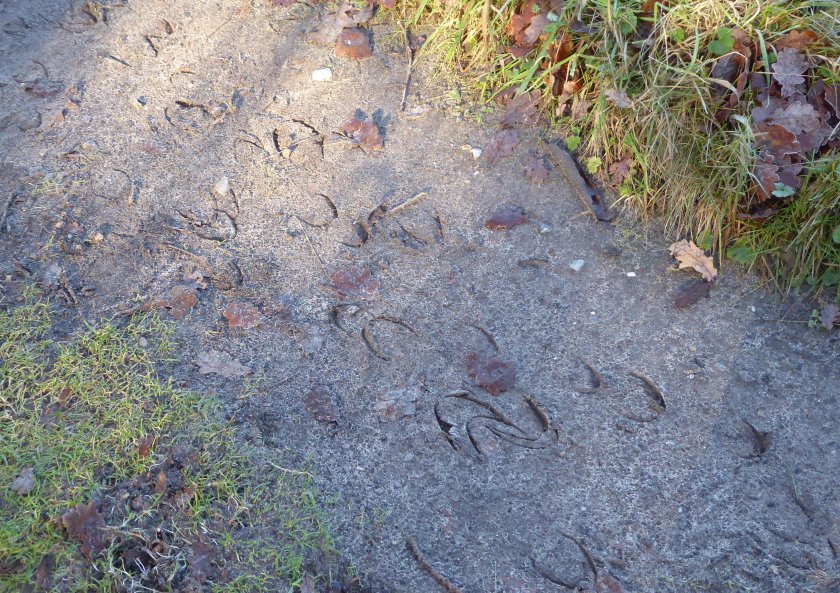 A Squirrel was eating,with others jumping and running about in the woodland.

We had an excellent view of a pair of Bullfinches eating berries at the top of a bush.  The Konik Horses were feeding onthe scrapes.

At the beachwe had a sea; bobbing its head above the waves.

On the final walk round whilst the sun started to set we had the privilege to see Whopper Swans flying by the Isle of Mere Hide.

View from Isle of Mere Hide

There was a Water Rail eating and hiding along the reeds,then sprinted off.  A Bearded Tit came fowardand we had the best view of a male that we have ever had.

FInally before we left the hide a pair of Otters was swimming, playing and splashing around at the back.

On the walk back to the car we had four Red Deer walk in frout of us and they were watching us from trees. 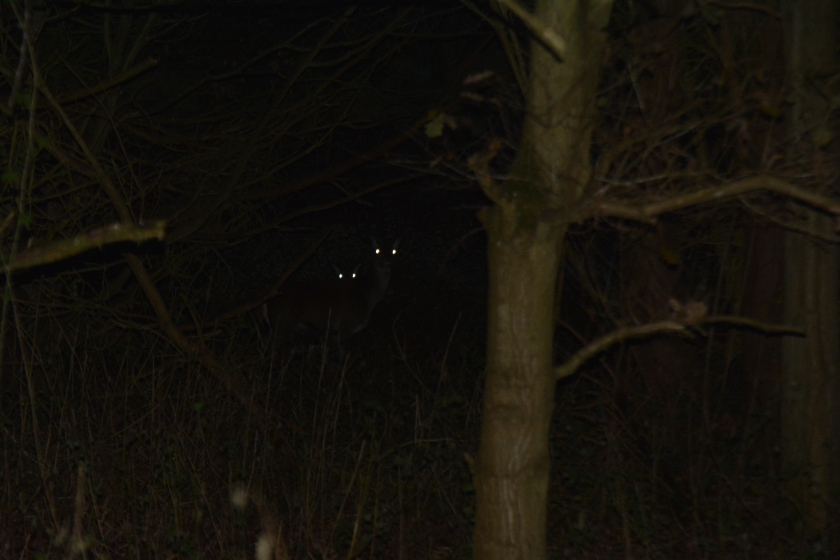 At the car the Tawny Owls were calling out to each other and as we left a Muntjac Deer walk in front of us.  This was an extremely good end to the day.

Had a walk round Rainham Marhes this morning, which was cold in the wind.  Finally got to see a Firecrest after three weeks of trying.

Highlights with a few pictures are below, had a good view of a Barn Owl in its box and  Stonechats bouncing round.

Had quite few different birds of prey including, Marsh Harrier flying over cows, Kestrel hovering and a Sparrow Hawk hunting. 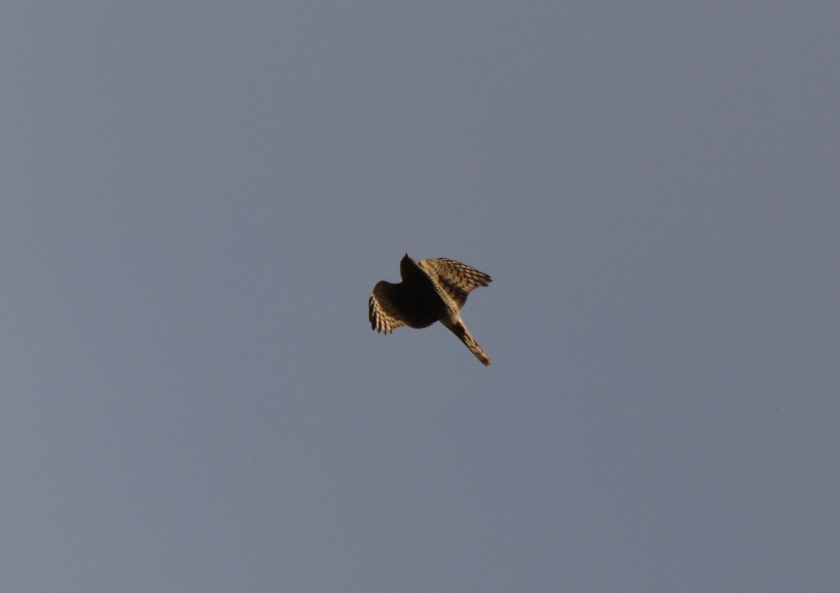 Variuos ducks of which Pintail was my favourite.

Waders including good view of Curlew and a Ruff from the Ken Barrett Hide. 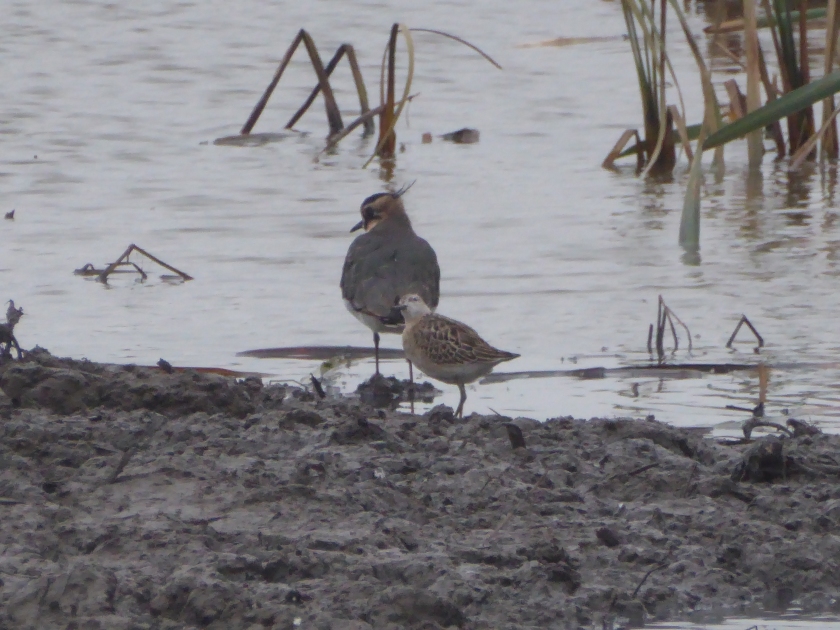 Ruff in front of a Lapwing

We had all three pipits, Meadow, Rock and excellent view of a Water from the Ken Barrett Hide.  For the keen eyed there was a Common Snipe hiding in the edge of the mud.

Robins were jumping around in the bushes with Blue, Great and Long Tailed Tits. 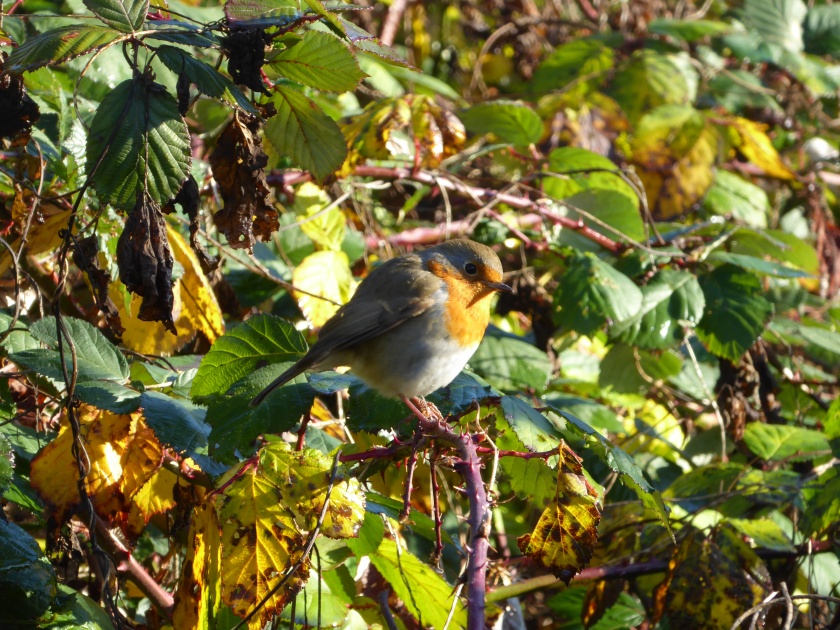 Little Egret was stalking and hunting for fish.

Had a couple good days out and about looking at the various wild life at Rainham. 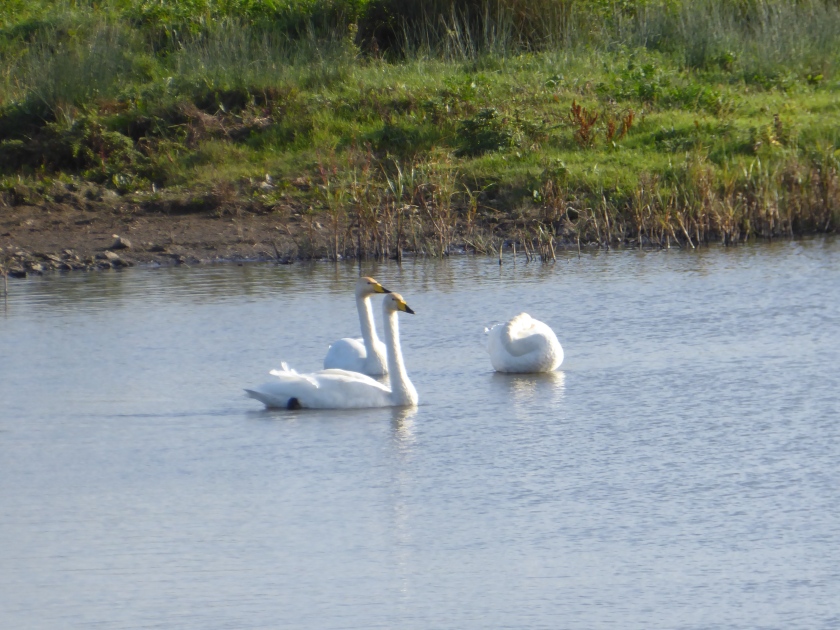 We got up early and arrived at 9am after couple hours in the car.  This was our first time to Titchwell and we started to explore hoping to see somehing new.

We walked towards the beach and saw some Redshank & Black Tailed Godwit up close.

There were lots of Curlew feeding in the grass with Brent and Pink Footed Geese on the mud.

We searchd through the Dunlin and enentullay managed see a Curlew Sandpiper.

When we got to the beach the tide was in so there was less about, but was happy to see a Red Breasted Merganser fly past.  We decieded to go back to get something to eat and then come back later to the beach.   Whilst walking we were surprised to find a Chinese Water Deer.

After luinch we took a dffierent route and was watching some Stonechat and Redstart bounding aroung in some dead trees.  There was a Common Darter, which did not mind having its photo taken.

Back at the beach the tide was out and there were lots of Turnstone and  Sandling feeding.  We were helped out by a local and found Common Scoter and Red Throated Driver out at sea.

It was a good day as I saw new a new Deer and birds that I had not seen before.