In the centre a Kingfisher was hovering over a lagoon and a Grey Wagtail landed on a bench. As we started the walk we were on the sea wall and Howard pointed out some Yellow Legged Gulls, Little Egrets and Greenshank. Nearing the bay I found a Beetle with red legs, also at that time two Kestrels were hovering in the distance. As we was looking at the Kestrel Howard noticed a Buzzard getting mobbed by some Rooks. We continued to the bay and saw a group of Black Tailed Godwits and carried on as there was not much else to see. We walked down through the gate and started looking on the fence posts for a Whinchat, because it was what we aimed to see today. Whilst walking towards the dragonfly pools we kept a look out. We heard a faint Bearded Tit call in the far reeds. On the fence there was an Ant Mimic Jumping Spider that without looking properly, it really looked like an ant. Then a Common Darter landed next to it. On the wall near the hide there was a Weasel hunting and everyone on the walk was really excited that they had seen it. As we were approaching the butt’s hide a Marsh Marrier was flying. We made our way to Averly pool, found some Reed Dagger Caterpillars and a Slender Groundhopper. I haven’t seen a Groundhopper for two years and neither had Howard. When we got to Averly pool there was a group of Hobbies and Kestrel sparring and that was amazing. At the end of the board walk a Common Lizard was there and I got a nice picture. In the kids play area there was a Wasp Spider and a very small bee and I took a photo of it when it was on Howard’s finger. We then had lunch in the centre before we went out to the Serin Mound as we had not seen our Whintchat. At the Serin Mound I wanted to find a Whinchat and after a few minutes there was four sitting in a tree. A happy end to a fantastic day. 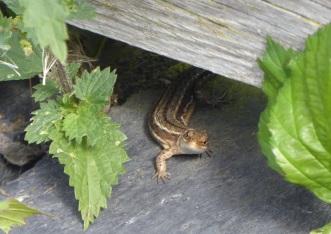